Yesterday was the four year anniversary of my 1st road race. Four years ago at Devil’s Punchbowl, I rode away from the field and won! But USAC official, Jack Vincent, relegated me to last place because I failed the roll out. At the time I had no idea what junior gears were…

Anyway, that is the story of my first road race. I still stay in contact with Jack and he has helped me tremendously thought out my cycling career. We even met up at Sea Otter last week.

Yesterday at Devil’s Punchbowl, I had a solid ride.

As always the first climb starts out easy, but by the top some people are getting dropped and almost everybody is in pain. I rolled off the front at the top of the climb and tucked all the way down. I then road the next 63 miles solo and out of sight from the field.
Just as I was going into the last lap, what was left of the field caught me. Louis Meintjes, one of my teammates, overtook me and road the last lap solo (at one point 2:40 ahead of the field) for the win. 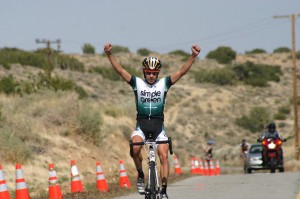 I rode with the front part of the field, four including me, for the last lap. I attacked with about 1K to go, but couldn’t break away. Just before the finish, two remaining riders got a gap on me and started playing games for the sprint… I caught and was able to take advantage of them with enough time to move around for a tough take second place finish!