MONTEREY, CA – Here’s a recap of the team results at the 22nd Sea Otter Classic which took place over 4 days, from April 19-22. Members of Cycles Veloce (Team Simple Green/Bike Religion) participated at several different levels. One of the team’s younger riders, Thomas Omori, participated in the MTB event and qualified for a slot at US Nationals in the Cat 3 event! We love seeing these young guys test their legs and develop their skills.

It was four days so below is a brief report on every stage.

Stage 1 Crit: Stage 1 started off very fast as every team tried to be in the front split. About 10 minutes into the race, riders started dropping off the back while Simple Green, Exergy and Kenda kept the pace high at the front. Connor McCutcheon managed to escape off the front with Morgan Schmit and Andy Jacque Maynes. They quickly opened a 1minute gap and held the bunch off untill the finish. Connor finished at 2nd place after putting in big efforts in the break to stay away. He also won the points jersey, putting Simple Green in a very strong tactical position.

Stage 2 RR: The road race was an important race for the GC competitors. The terrain suited our riders, especially the hilltop finish. Connor got caught up in an early crash and ended up chasing for 30miles. Meanwhile, Louis Meintjes escaped with a strong group of riders. The group stayed away for most of the race, but was caught with 10 miles to go. Connor managed to make contact with the bunch again and tried to recover from his effort. Christian Varley and Jos le Roux managed to finish well in a very hard lead up to the finish. Louis finished in 5th (also 5th GC) place and also took the KOM jersey, while Connor kept the points jersey. Christian finished in 11th place and Jos 15th.

Stage 3 TT: The time trial showed the true potential of the team with limited equipment. Louis got a 4th place at only 15 seconds down on the 8 mile course. Jos finished 23rd, Christian 38th and Connor 42nd after having mechanical difficulties on the road. The boys now had a firm grip on their GC standings and still looked strong. 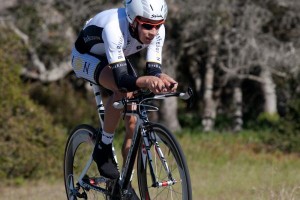 Stage 4 Circuit: The final day involved hard and fast racing over the undulating Laguna Seca race course. Riders with tired legs dropped off early. Connor and Christian escaped with a group of 6 other riders after 20minutes. But other teams closed it down trying to protect their GC riders. Jos and Christian continued to try their luck off the front to upset the sprint. The race ended up with a bunch sprint of 30 riders where Jos finished 11th while the rest of the team crossed the line in the bunch.

This was the first year in many that I didn’t go to Sea Otter with the intent of racing. My wife Vicki and I decided on Thursday to drive up on Friday. We figured we’d spend one night, enjoy an evening in Monterey and maybe do a little mountain biking around the festival at Laguna Seca. Once we got there however, we got ambitious and signed up for the mountain bike Gran Fondo. The Gran Fondo was to take place on Saturday morning and entailed a one 20 mile lap on the cross country race course. Having never done the cross country race or ridden the course before, I figured it would be a great opportunity to have a fun and relaxing ride with my wife and 349 of my new best friends.

Saturday morning the weather was better than I ever remember it being at Laguna Seca. The sun was out, wind was extremely light, and the recently rained on mountain bike course had dried out perfectly. Vicki and I lined up mid pack and listened to the race/ride announcer warn us of the technical sections, the heat, and of the pain each of us were about to feel. Watching Vicki, I could see she was anxious; excited, but anxious. An avid mountain bike rider, Vicki rides pretty consistently on the local trails in and around Laguna Beach, but 20 mountain bike miles can be a real butt kicker. And riding on unknown trails with so many unknown people would be daunting for both of us.

Watching me watch the front of the ride take off as if it were a 5K prologue, Vicki slackened her leash and said I should ride my own ride and to not let her slow me… I didn’t hear the rest as I was already chasing through the masses.

There were a couple of short technical climbs in the first three miles which allowed me to pass groups of people who were already hiking their bikes. By mile five or six, I could see what appeared to be about 10 people strung out ahead of me. I kept an even rhythm and slowly reeled in one rider at a time. At roughly mile eight I caught a guy who pointed out the rider in front of him and said, “He’s in first place, you’re now in second.” I reminded him that the Gran Fondo wasn’t a race, “It was a fun ride” I told him. He just laughed and told me to catch the guy. At mile 10, I caught and trailed him on the short climbs and pretty single track. He asked how far back everyone else was and seemed concerned about getting caught. I told him we were fine and that it didn’t matter because “it was a fun ride.” At mile 11 we hit one of many fire road climbs and I kept up my rhythm and he fell away. For the next 9 miles I had a great time by myself. I didn’t have to worry about someone crashing in front of me or endure the pressure of someone riding on my rear wheel down a technical descent. I thoroughly enjoyed riding at a safe clip to the finish line.

After I rode under the start/finish line banner I saw several volunteers handing out medals for the Gran Fondo finishers. Always the racer, I asked one of the girls, “I know this wasn’t a race or anything, but…, did anyone finish ahead of me?” She directed me to an official standing off to the side and he pointed to one other mountain biker who had crossed shortly before me and said, “Yeah one guy, him.” DOH!!!!

I didn’t care, after all, it was a fun ride, right?

All Gran Fondo participants were given complimentary massages so I quickly got mine (very nice!), and then waited for Vicki. She rode to the finish with a smile on her face and looked a lot fresher than me! She got her massage and we then made our way to our Gran Fondo complimentary beer, meal, and inner tube from Kenda. This was perfect since Vicki ran over a nail and flatted her 29er tubless tire. What a nail was doing out on the Sea Otter mountain bike course is beyond me, but Vicki found it. And yes, she fixed her own flat.

Any thoughts I may have had of racing next year in the mountain bike category was quickly shelved when I saw the winning lap time for the pro’s was 1:13, as opposed to my weak 1:42. Next year I’ll go back and stick to the crit and circuit races.

Until the next Gran Fondo (race),
Russell Shapley