For Kriek good performances are of vital importance with his sights set on a spot in one of the bigger teams in the US. “Things are going well for me in America. I feel at home here. It looks a lot like South Africa and the people are friendly. I need to win races regularly to be able to take the next step. I’m glad that I have been getting some good results.”

The CBR Criterium is a 75 minute Criterium. The route wasn’t very technical and no hills to speak of really. Kriek was in a break with two riders from the Jelly Belly team for about 40 minutes. Cashcall Cycling was represented well in the bunch and they managed to bring the break back.

“With one lap to go I knew I must be on the wheel of the Cashcall sprinter to stand any chance of winning. It was difficult though, because everyone had that idea. In the end I had to settle for second place.”

Kriek has been working on his sprinting in recent weeks and after the second place at the CBR, his hard work paid off at the Snelling road race.

“It is the first big race of the season in this region of north of California. Big teams like Jamis Sutter Homes, California Giant Berry Farms and Competitive Cyclist were present. All three are Continental teams in the US.”

The race was over 6 laps of 25km each (150km in total) with no big hills, but fairly technical and undulating. The biggest factor of the day was the wind of 50km/h though. “The hardest part of the race was the sections right before the gutter, because everyone wanted to get out of the wind…some more than others. Riders took crazy chances to get on the right wheel.”

There weren’t many attacks during the race even though Kriek tried a few times. But because of the wind nobody was really committed to take the chance. On the penultimate lap the real action started. “Ten riders got away, but I wasn’t in a good position at that moment so I had to cross the gap of 20 seconds by myself to get to them.”

In the last 10km there were two dominant teams. Mike’s Bike had four riders and California Giant Berry Farms two. “I didn’t feel great, but I really wanted to win the race. So I just made sure I keep my head in the game.”

The finish was on a slight incline and that suited Kriek. “With 400m to go I was third wheel and with 20m I had only the last California Giant Berry Farms rider to pass. It was very close. But I have been working really hard on my sprinting and it was good to see that it is paying off.” 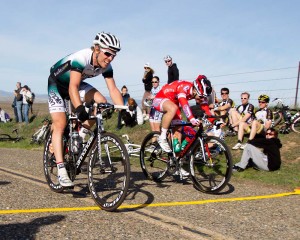