LANCASTER, CA – Lake Elizabeth was the venue for the Masters Women State Championship road race. The course was a 14 mile loop, with about 1,100 feet of climbing. Most of the climbing came over a 4.6 mile climb that reached grades of over 14%.  The race start/finish line was 1.6 miles up the climb.  From the start line, we were confronted with a 30+ mph headwind, a potholed road, and 3 miles of climbing that got steeper with every turn. At the top of the climb, there was about 2.5 miles of gradual descent and flats, followed by a right turn and a short steep (10%) kicker of a climb. After the short steep kicker, there was about 5 miles of screaming downhill that was steep, twisty but not technical, and had lots of potholes.  At the bottom, there was a right turn and a couple of miles of flattish road that started with a strong crosswind until the road curved to a strong tailwind. This led to the right turn where the climbing started again. 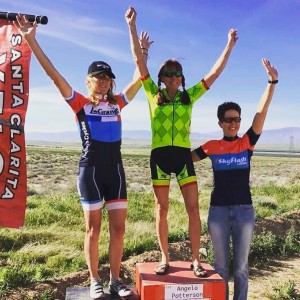 All the masters women started together (35+, 45+, 55+, and 65+) with each age group scored separately for their championship.  I knew some of the racers in other age groups, but only knew one of the 45+ racers, a former teammate (now racing for Skyflash) who had won the State road race in 2011.  I planned to be attentive to everything.  On the line, the race director shortened our race to two laps due to the extreme wind.

A racer in a different age group, who had some teammates, did some pace setting at the start of the first lap. I didn’t know the course and wasn’t feeling snappy (due to some craziness earlier in the week involving a 6 hour ride), so I only used energy when it seemed worth it. It seemed worth making the group work a little when a competitor started letting a gap go, and when I noticed another competitor mashing the pedals.  Racers in other age groups also ramped it up a few times, and a La Grange 45+ racer did a couple of surges; she seemed strong.  I learned later that she had taken second at the State road race last year.

The climbing on the first lap had been generally uneventful other than some surges, so I attacked on the first lap on the short steep kicker (just before the screaming downhill).  A 35+ racer went with me, but also some 45+ racers so it didn’t seem worth pursuing a break.  On the descent, I hit a max speed of 48 mph without any effort and also hit a pothole HARD and thank God did not blow my tire.  After the right turn at the bottom of the descent, there was a short section of very strong crosswind but then the road turned and the tailwind let us reach speeds of over 30 mph without effort.  Despite the initial crosswind, the tailwind gave us a fast (5 min) trip to the right turn where the climb started, and I got a chance to see and feel the climb heading to the start/finish line.

The start of the second lap was more of the same – an extremely windy grind.  One of the 55+ racers (a reigning State time trial champion) did a lot of pace setting on the climb. The headwind was so strong that the group seemed content to let her set the pace.  The La Grange 45+ racer attacked on the kicker just before the long descent and shed a few ladies.  After her attack, we had a group of three 45+ racers (Skyflash, La Grange, and myself), a 55+ racer from SLO, and two 35+ racers.  Partway down on a flatter section of the descent, one of the 35+ racers had a brief chat with La Grange and then attacked while La Grange sat up and gave her a gap. I let the 35+ racer go – she wasn’t in my age group so it would have been a waste of energy to chase (and I would have been towing my competitors).  The 55+ racer was motivated to stay away from her competition, so she did some work on the flats.  When we made the right turn at the base of the climb, we spread out across the road (“mano y mano” aka hand-to-hand combat) and it was basically a slow motion drag race over the 1.6 mile climb to the finish line.  I had the good fortune to have a little stronger kick at the finish (probably from all those town sign sprints against my boyfriend) and won by a couple of bike lengths.  Big thanks to Simple Green, Bike Religion, and Cycles Veloce for sponsoring me!