LAKE LOS ANGELES, CA – Racing in the Antelope Valley, in an area known as Lake Los Angeles, guarantees a couple of things. One, you gotta get up and on the road pretty early if you’re going to make your start time. And two, you won’t see any lake since it dried up in the early 1980’s. But every year, skinny and hairless cyclists flock to the community of 12,000 to race their bicycles against the clock.

At an elevation of almost 3000′, weather can be unpredictable. Two weeks prior, the temperature was moderate and there was no wind. This Saturday, however, the prevailing west winds were blowing at a steady 20 to 30 mph. This favored us racers since our course was a rectangle and we covered the tailwind leg twice. Perfect conditions for record setting times. 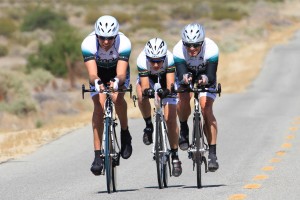 And so it was, on a windy day in beautiful Lake Los Angeles, where Hollywood filmed so many westerns in the 40’s, 50’s, and 60’s (Yep, Little Joe saved Hoss from that band of indians right down the street from the start/finish) that the skinny and hairless cyclists challenged themselves and each other in the 2012 Team Time Trial State Championships. The teams participating consisted of:

The fastest of the teams was Connor McCutcheon and Ryan Early. They hammered out a silver medal performance with a blistering time of 47:08.

Gary Westerfield and William Langstaff also secured silver in their division with a 59:03.

Taking gold in the 2-man 110+ division, Kenny Fuller and Mark Ulrich schooled their competition with a 52:07. 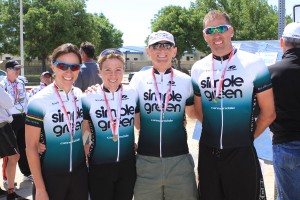 You won’t catch any fish at Lake Los Angeles, but with the right partners you might catch yourself a Bear.