The Southern California Prestige Cyclocross Series came to an end this weekend at Griffith Park Santa Cross race.  Cycles Veloce/Team Simple Green was represented well in most all categories with strong riding and several podiums.  Brian Sanchez and his sons performed well with Ethan placing 6th in the day’s race and 7th in the overall series.  Jonah, Ethan’s older brother placed 3rd the day’s race and placed an impressive 3rd in the overall Junior series.  Jonah went on to compete with his dad, Brian, in the Men’s “C” category.  Brian had to leave Jonah behind however and placed a strong 2nd place in the day’s race giving him 6th place in the overall series.  Micah Sanchez, the 9 year old took the weekend off. 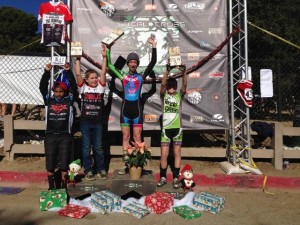 Jonah Sanchez on the podium!

Also home from college and out racing was Wyatt Meyers who competed in the U23 category on a rented bike.   The rented bike was no problem for Wyatt as he went on to place 3rd place in a very strong field.  Wyatt’s always supportive mom, Rebecca was on scene to cheer on and support the team.

Lastly, Troy Gielish placed 7th  in the 45A category which left the Simple Green/Bike Religion Cyclocross Team in 23rd place out of the 160 bike teams that competed in this four month race series..

Cyclocross season is not completely over yet though. The Cross Fever series starts next week at Irvine Lake with racing both days (Dec 28-29th).  Sunday’s race will be the California State Championship so come out and cheer on your Simple Green team!